Sit on $9.6 billion in stocks is not enough! Buffett’s new "prey" may be airlines

Topic:Stocks that rose the most in 1996

Thirty years ago, Buffett’s investment in USAir has become a big mistake that has been spread to the outside world. But in recent years, he has re-entered aviation stocks to "sweep". Airline companies whose stock prices are cheaper may become Buffett's next acquisition target.

Friday, 22nd Eastern Time, Bloomberg reported that Buffett’s attitude towards airlines has been different from that of his investment in USAir in 1989. This change in attitude will inspire him Negotiations on the acquisition of the airline by its subsidiary Berkshire Hathaway.

Wall Street has noticed that at the Berkshire shareholders meeting in 2013: "Buffett once said that investors have invested in airlines for 100 years, but the rate of return Very low. For investors, the aviation industry is tantamount to a “death trap”.” However, in the third quarter of 2016, Berkshire successively bought American Airlines, Delta Airlines and United Continental Airlines. The stock of Great American Airlines had a total holdings of more than $1.28 billion at the end of the quarter. Then Buffett also said that he bought Southwest Airlines.

After more than two years, Buffett’s above-mentioned holdings have shrunk, but they also total nearly US$9.6 billion.

At the same time, the stock prices of these companies are lower than in the past.

According to the statistics of Yahoo Finance on Wall Street, as of the close of this Friday, compared with last year’s high, the share price of American Airlines (AAL) has fallen by more than 40%. Southwest Airlines ( LUV) fell nearly 23%, Delta Air Lines (DAL) fell more than 18%, and United Continental Airlines (UAL) fell nearly 18%. 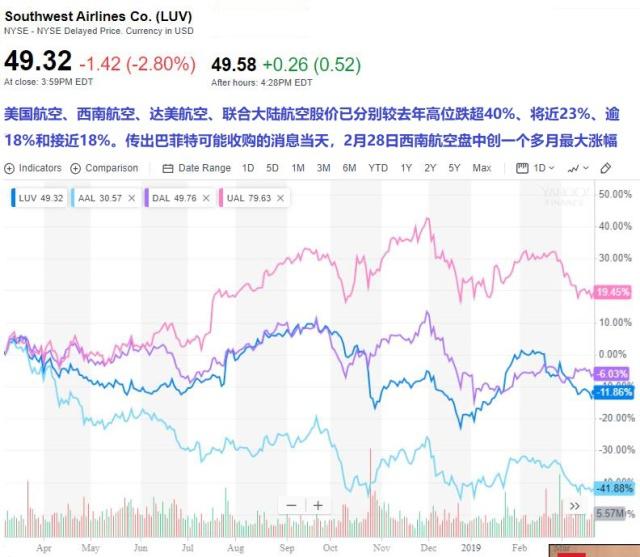 Wall Street has discovered that after buying aviation stocks in 2016, Buffett explained in an interview with CNBC at the end of February 2017 why he made another move. He said at the time that airlines' performance in the 20th century was indeed poor. I hope they have gotten rid of that dilemma, and that they will rationally maintain orders in the face of potential demand.

On February 23 this year, Buffett announced in his annual shareholder letter that as of the end of 2018, Berkshire Hathaway held US$112 billion in US Treasury bonds and Other cash equivalents exceeded US$100 billion for six consecutive quarters.

In the letter, Buffett stated that he hopes to complete an acquisition, but "the stock prices of companies with good long-term prospects are'sky prices'". He wrote:

"This disappointing reality means that in 2019, we may expand our holdings of saleable securities. However, we still hope Carrying out elephant-size acquisitions. Even at the age of 88 and 95, we are young people. The prospect is the reason why my heart beats faster with Charlie (his partner Charlie Munger)."

After the shareholder letter was announced, Buffett told CNBC on the 25th of the same month that Berkshire was close to completing a super-large acquisition in the fourth quarter of last year, but eventually In the end, he did not disclose why the transaction failed, but hinted that he encountered some competition from private equity funds, pointing out that they used leverage to have huge purchasing power and "competition was very fierce."

Coincidentally, not long after, on February 28, Twitter reported that Buffett was discussing the acquisition of Southwest Airlines. On that day, Southwest Airlines’ stock price rose by 5.8%, a record this year. The biggest daily increase since January 24.