As a The largest active equity fund at the end of the quarter, in the announcement of participation in the non-public offering of shares on May 17, the "newest" scale of Invesco Great Wall's emerging growth was exposed. According to calculations, the size of the fund has reached 58.5 billion yuan, a 8.8 billion yuan increase from the end of the first quarter, and Liu Yanchun's own management of the fund is likely to exceed 120 billion. With the rising of the star fund manager’s management scale, Zhang Kun and Liu Yanchun have joined hands to start the era of top 100 billion public offerings, but the growth in volume has also allowed top stars to accelerate the process of abandoning small-cap stocks and choose to firmly embrace core assets. Blue-chip targets of this kind have become a consensus.

According to statistics, many tens of billions of funds have long-term heavy holdings, and these targets even started to hold heavy holdings when the product was not well-known a few years ago. For example, funds such as E Fund Small and Medium Caps, Invesco Great Wall Emerging Growth and China Huitianfu Consumer Industry have been holding Moutai continuously for more than 3 years. Among them, E Fund's small and medium-sized caps opened a continuous heavy position in Moutai when the scale of 2013 was only about 2 billion.

From the perspective of heavy stocks, there is a lot of overlap between the long-term holdings of public funds and the targets of "grouping and heating", and most of them belong to the category of core assets , Including liquor faucets such as "Mao Wulu", home appliance faucets such as Midea and Gree, medical faucets such as Aier Ophthalmology and Changchun High-tech.

The core assets have been "dominant" in the past 3 years.

After a short period of shock adjustment, this week, core assets staged a counterattack in the A-share market for three consecutive trading days.

According to statistics, among the 3413 active equity funds, 247 have already set a record high on May 26. As their core assets are flying again, they are finally waiting to see the light of day by sticking to their core assets. Funds that have been controversial during this year's "group stock" callback, including E Fund Blue Chip Selection and Invesco Great Wall Emerging Growth, have also used the opportunity of counterattack to quickly regain lost ground.

The dazzling performance of public funds in the past two trading days may not be due to the short-term exchange of positions, and their long-term holdings may have contributed a lot to some extent. Take Zhang Dongyi, GF's "goddess of consumption" as an example. The net value growth rate of many GF Juyou products under her management exceeded 3.5 percentage points on May 25. Among GF Juyou’s heavy stocks, Luzhou Laojiao, Kweichow Moutai, and China CDF and other stocks with the highest gains have been held by her for more than 3 quarters. Among them, Kweichow Moutai has been held by her for 14 consecutively. Quarter.

The situation similar to Zhang Dongyi is not an isolated case. Among the 12 funds with a management scale of more than 10 billion yuan and established for more than 3 years, Yifangda small and medium-sized caps and Invesco Great Wall Xinxing Growth, Huitianfu's consumer industry and Fortune's Tianhui Selection Growth have been in Kweichow Moutai for more than 12 consecutive quarters.

In addition to Kweichow Moutai,

From the nature of the target, it is not difficult to see that the

public offering fund’s long-term holding of the target is basically the same as the “group stock” in the general sense, and it basically belongs to the category of core assets. Although stock prices in the secondary market inevitably fluctuate, as of the close of May 26, the above-mentioned 13 stocks have all achieved gains in the past three years. Among them, pharmaceutical stocks and liquor stocks have the highest gains. Tigermed, Wuliangye , Luzhou Laojiao and Aier Ophthalmology have all increased by more than three times; while the performance of home appliances, real estate and insurance has been relatively weak in the past three years. Gree Electric, Ping An of China and Poly Real Estate have increased by 32.67% and 29.76% respectively. And 21.92%.

In this regard, the chairman of the tens of billions of private equity Yiluo Investment once said: "With more funds and less high-quality targets, the top advantages among listed companies will gradually appear. Leading companies have brand names. Long-term competitive advantages, such as costs, barriers, etc., are more certain. As for the selection of long-term stock holdings, Wang Liang, director of the research department of Minsheng+Bank, also said: “My investment strategy is to choose leading companies in various industries for long-term holding. However, there will be no lock-up at the moment, and investments will be made by focusing on changes in the fundamentals of quality companies. ”

Attached table: List of long-term holdings of tens of billions of public offerings 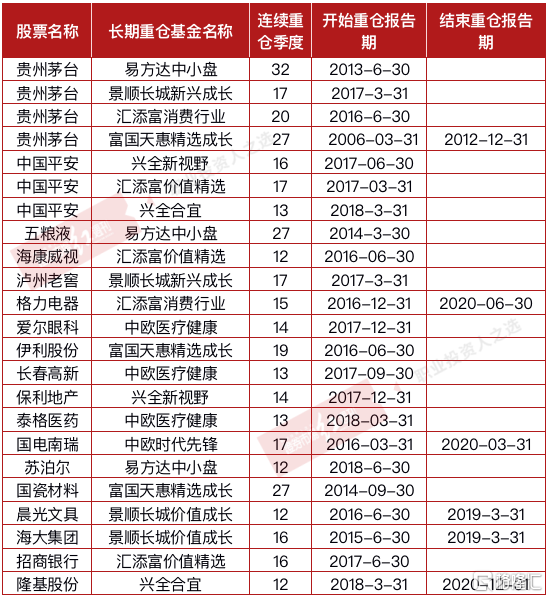 Top-tier fund managers have their own "good hearts"

In addition to the consensus long-term holdings, there are also fund managers with their own "unique" long-term holdings, such as CEIBS managed by Zhou Yingbo Time Pioneer has been in the position of Guodian Nanrui for 17 consecutive quarters; and since the third quarter of 2014, Fu Guo Tianhui, managed by Zhu Shaoxing, has been in the position of Guodian Materials for 27 consecutive quarters. From the perspective of market performance, Guodian Materials' The gains are quite eye-catching. The stock has risen by 275% in the past three years, and Zhu Shaoxing’s floating profits since his heavy storage may exceed 6 times.

According to the data, Fuguotian Huishang was established in November 2005, and the fund has been managed by Zhu Shaoxing since its establishment. In the field of public offerings, such examples as Wang Yawei's China market are relatively rare, especially Zhu has devoted all his time to this fund. , So it can be said that the heavy warehouse stocks including Guoci Materials have witnessed this story of Fortune Tianhui.

Over the third quarter of 2009 to the end of the fourth quarter of 2013 In the past four years, Fortune Tianhui Growth has a long-term heavy position in the information service company Shiji Information. In the process of holding the position, the company’s stock price has also doubled, but at this stage, the company’s stock price has not been able to Copying the trend at that time, the increase in the past three years was only 17.28%.

In fact, the overall situation of the information service industry at this stage is also underperforming. As of At the close of the market on May 26, the CSI All Index Information Service Index has fallen by nearly 30% in the past three years. In addition, from the second quarter of 2010 to the first quarter of 2014, real estate stocks Xinhu Zhongbao also dominated the growth of Fortune Tianhui The heavy stocks of the fund never appeared in the fund’s heavy holdings. On the one hand, the real estate as a whole entered the silver age from the golden age, and in this process, the leading companies are often more concerned by the fund.

And Zhu Shaoxing said in the latest quarterly report: "At the level of individual stock selection, the Fund prefers to invest in companies with good corporate genes, complete corporate governance structures, and excellent management. enterprise. We do not have the ability to accurately predict short-term market trendsAnd concentrate on patiently collecting outstanding companies with great prospects, waiting for the realization of the company’s own value creation and the cyclical return of market sentiment at a certain point in the future. ”

There are not a few examples of Xinshui stocks moving forward with star fund products. Zhang Kun is also one of them. He continued to invest heavily in E Fund’s small and medium caps in Maotai, Guizhou. , The size of the fund is only about 2 billion. After the fund size exceeded 5 billion in 2018, his holding of Kweichow Moutai has also been maintained at more than 1 million shares.

Long-term shareholding is the choice for fund managers to practice value investment. With the increase in scale, this trend is becoming clearer.According to statistics, at the end of the first quarter of this year, there were 48 active equity funds with a scale of more than 10 billion. In the same period in 2019, there were only A handful of five. The largest single product has also changed from Xingquan’s 32.475 billion yuan to Invesco Great Wall’s emerging growth of 49.669 billion yuan.

As the scale increases Large, public equity funds can only choose among large-capacity companies. Take the Invesco Great Wall Emerging Growth managed by Liu Yanchun as an example, the fund’s stock investment market value at the end of the first quarter of this year was 47.06 billion yuan, ranking in the top ten. The market value of Gujing Gongjiu, the last of the major stocks, has reached 1.998 billion yuan. According to statistics, out of the 4,319 listed companies currently on the market, more than 3,561 companies have a market value of less than 19.998 billion yuan, which means that As a result, the holding market value of Invesco Great Wall's tenth largest emerging growth stock has exceeded 10% of their market value. Such small market capitalization stocks cannot reach the standard for being heavily held by large-scale funds.

In addition to the limited selection of targets, the increase in the size of the fund also has a practical impact on the operation of fund managers. The article "A-Shares Entering a New Era of "Passive Investment"" also pointed out that: At the operational level, when managing tens of billions of funds, some stocks with a daily turnover of less than 100 million yuan are basically bought cautiously or abandoned. Because once bought, this stock may rise by 5 points or even 10 points, raising the cost of buying and holding positions, and it is difficult to exit. Therefore, institutional funds have to buy large market capitalization stocks with sufficient trading volume. "

"When the scale of funds reaches a certain level,'passive investment' is more effective in terms of rate and scale. This is the trajectory of overseas development, and we may also develop along this trajectory. "

In addition, Chang Jue, a well-known fund analyst, said: "As the size of the fund increases, it is necessary to choose a large market capitalization subject with better liquidity, which can be used in the market. Given the limited selection of bids, many celebrity public offering products will also have the problem of convergence in yields. For them, it is not easy to obtain excess returns in the short term, but long-term investment in high-quality targets still has a great opportunity to outperform the market. "

Chang Jue emphasized: "In the era of big funds, investment is also a major test for fund managers. At this time, fund managers with long management periods have the advantage of experience. It can be fully reflected; and fund managers who have achieved beautiful performance through short-term games will also be difficult to continuously outperform the market due to insufficient experience after the scale becomes larger. ”