Changsha Bank with a market value of 38.9 billion yuan, 17 executives only sold 1.37 million yuan to stabilize the stock price, investors said it was funny

On June 8, 2021, Changsha Bank issued an announcement on a plan to stabilize stock prices. According to disclosures, 17 managers including current directors and senior managers of the bank will increase their shareholdings in a total amount of not less than 1,379,100 yuan, and the implementation period for the increase is within 6 months from 6th 8th 2021. Prior to this, Changsha Bank had issued an announcement stating that it would convene a board of directors to formulate a specific plan to stabilize the stock price.

However, the capital market is not buying this so-called good news. As of the close on June 8, Changsha Bank reported 9.67 yuan per share, a decrease of 0.1%. AI Finance and Economics called Changsha Bank about the performance of the stock price decline. The staff of the bank said that the problem has been recorded and will be reported to the leadership in the follow-up.

Changsha Bank is the first city commercial bank listed in Hunan Province and the 28th bank to list A shares, but its performance in the capital market has been unsatisfactory. Since its listing on the Shanghai Stock Exchange on September 26, 2018, Changsha Bank has triggered the stock price stabilization plan four times.

On August 31, 2019, Changsha Bank triggered the stabilization plan for the first time because the stock price was below 8.78 yuan per share for 20 consecutive trading days. However, the plan was not implemented in the end. On February 27, 2020, Bank of Changsha once again issued a plan for stabilizing stock prices. Changsha Bank’s largest shareholder, the Changsha Municipal Finance Bureau and related members of the directors, supervisors, and senior executives, increased their holdings of their own stocks, with a cumulative increase of 1,904,200 yuan, October 20, 2020 , Changsha Bank once again triggered the stock price stabilization plan. On the evening of October 19 of the same year, 17 directors, senior managers, chairman of the board of supervisors, and secretary of the discipline inspection committee increased their holdings by a total of 2,994,500 yuan.

Looking at the timeline, the stock price of Changsha Bank continues to be in a downturn, and like other small and medium-sized banks, it has been in a state of deteriorating for a long time. Frequent stock price stabilization plans have not played a long-term role in boosting it. As of June 8, 2021, Changsha Bank's price-to-book ratio is 0.85, and its current total market value is 38.88 billion yuan. The closing price is 13.89% lower than the highest point of this year's share price of 11.23 yuan per share.

If calculated at a total amount of RMB 9.67 per share and RMB 1,379,100, Changsha Bank’s increased shareholding is only 226,900 shares, which is 995 million. The proportion of outstanding shares can be described as a drop in the bucket, and the stimulus effect on stock prices is doubtful.

In the Oriental Fortune Stock Bar, shareholders of Changsha Bank have also repeatedly questioned this share price increase plan. Some investors said with emotion, "I already hold 5 million shares, are you funny", "The average person is 81,000 yuan, which is less than my small retailer", "I bought 1,000 shares a long time ago.Ten thousand shares, you 17 directors and chairman of the board are not sensible at all, only bought 1.3 million yuan, is there a problem with your finances? ” 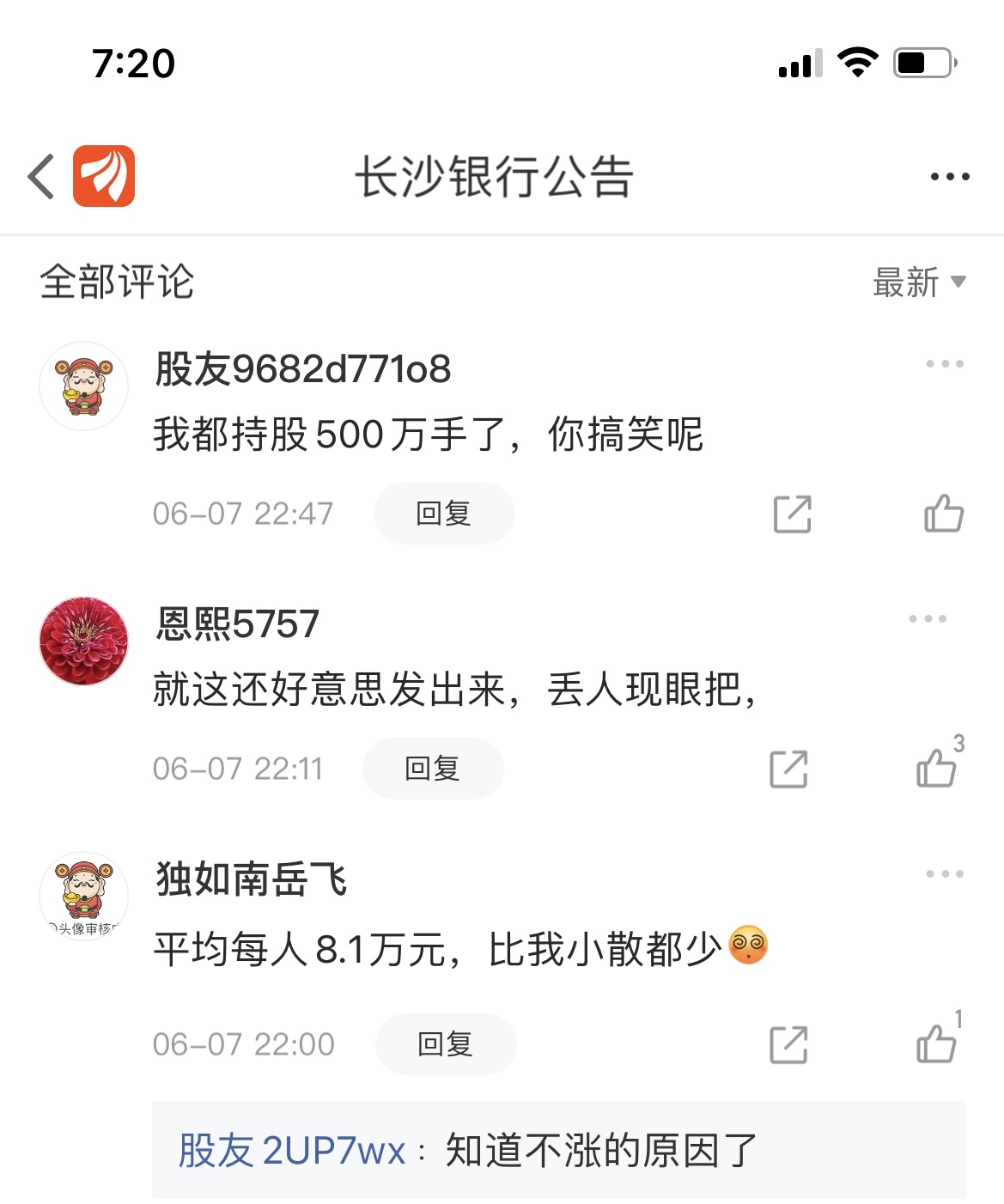 According to public information, Changsha Bank was established in May 1997. It is the first regional joint-stock commercial bank in Hunan Province and the largest legal person financial enterprise in Hunan Province. In 2018 On September 26, it was listed on the main board of the Shanghai Stock Exchange. As of the end of December 2020, the total assets of Changsha Bank were 704.247 billion yuan.

In recent years, Changsha Bank’s operations Performance has slowed across the board. As of the end of 2020, Changsha Bank’s operating income was 18.022 billion yuan, a year-on-year increase of 5.91%; the net profit attributable to shareholders of the parent company was 5.338 billion yuan, a year-on-year increase of 5.08%, which is also the operating indicator of Changsha Bank in recent years It fell to single digits for the first time.

In the first quarter of this year, Changsha Bank’s performance was also exhausted. The bank achieved operating income of 4.81 billion yuan and a net profit of 16.45. 100 million yuan, an increase of 1.2% and 5.17% respectively year-on-year.

At the same time, Changsha Bank has repeatedly received regulatory fines. According to incomplete statistics, Changsha Bank has received a total of 8 fines in 2020, and the amount of fines has exceeded one million yuan. The main reasons for violations include failure to include related parties of major shareholders in the bank. Related-party transactions caused the bank’s major related-party transactions not to be approved in accordance with the prescribed procedures, post-loan inspections were not in place, and loan funds were embezzled.

In addition, Changsha Bank also fell into In the scandal of the former vice president’s bribery and possession of guns. On June 26, 2019, the website of the Changsha Municipal Commission for Discipline Inspection and Supervision announced that Meng Gang, a member of the Party Committee and Vice President of the Bank of Changsha, accepted the Changsha Municipal Commission for Discipline Inspection on suspicion of serious violations of discipline and law. , Disciplinary review and supervision investigation by the Municipal Supervision Commission. 2019 On June 27, Meng Gang resigned from the post of vice president due to personal reasons.

On December 3, 2020, China Judgment Documents Network disclosed the “Criminal Judgment of the First Instance of Meng Gang’s Acceptance of Bribes, Illegal Possession, and Containment of Firearms and Ammunition,” according to the judgment. During his tenure, Meng Gang created the so-called convenience for others through job hunting, purchasing, etc., so as to accept bribes, and also used credit business to help companies obtain low-interest loans or facilitate loan approval. In addition, Meng Gang I also purchased two plastic simulation guns and an air pistol online.

Finally, the People’s Court of Tianxin District, Changsha City, Hunan Province ruled in the first instance that Meng Gang was guilty of bribery and illegal possession of firearms, and decided to carry out a combined sentence of ten years and four years. Month, and a fine of 350,000 yuan.

This article was originally created by the account of "Finance World" Weekly AI Finance Produced, without permission, please do not reprint it on any channel or platform. Offenders must be investigated.