Angong Niuhuang Pill is a kind of Chinese patent medicine, but it is divided into two kinds. The real medicine is made of rhinoceros horn (a forbidden drug). The price is more expensive, and the common medicine The ingredient is buffalo horn instead of rhino horn, so the price will be lower. Specifically,

Angong Niuhuang Pill is a Chinese patent medicine for clearing away heat, detoxifying and resuscitating. Its main role is to treat febrile convulsions, heat into the pericardium, and febrile convulsions. It can also treat stroke and coma, which belongs to the type of heat-closed pericardium and closed-yang.

The banned medicinal material rhino horn is the main medicine for clearing heat and detoxification in Angong Niuhuang Pills. Rhinoceros horn is now a state-protected animal and is now banned from being used as medicine.

The real Angong Niuhuang Wan is made of rhino horn, so it is more expensive. There are few on the market now, and the price is around 600-1000 yuan. 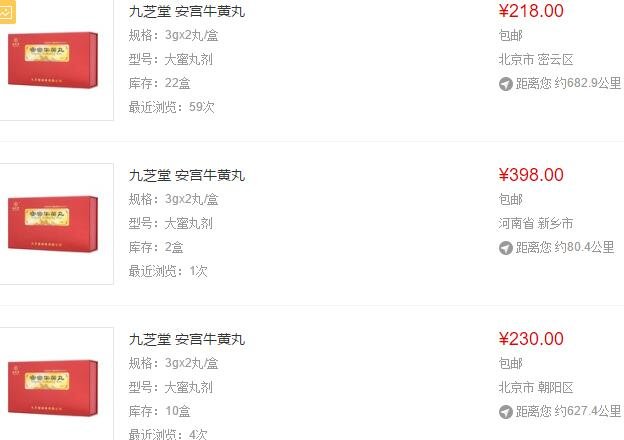 Angong Niuhuang Wan is the most famous emergency medicine in traditional Chinese medicine and one of the "Three Treasures of Cool Kai". It is composed of 11 drugs such as bezoar and musk. Not only are old drugs being fired at sky-high prices, but the sales of new drugs are also very hot.

In many people’s impressions, Angong Niuhuang Pills are even considered to be a miraculous medicine that can bring back the dead. In a pharmacy, the staff also took it as a preventive medicine according to solar terms.

A salesperson at a pharmacy in Beijing told reporters: "Take one piece every quarter, one piece for the four solar terms in spring, summer, autumn and winter. Basically, people over 38 and over 40, people with three highs will buy this. It can be used as a prevention."

Experts say that Angong Niuhuang Pill is indeed a kind of emergency medicine for refreshing the brain, clearing away heat and detoxification, treating stroke, coma, encephalitis, meningitis, cerebral hemorrhage, sepsis and other symptoms, but It is not recommended to take solar terms as a health medicine. In addition, patients still need to be aware of some medication errors when performing first aid for stroke.

In response, the reporter interviewed the chief pharmacist of the Pharmacy Department of Xuanwu Hospital of Capital Medical University. She said that Angong Niuhuang Pills are suitable for patients with heat closure. Teeth clenched, hands clenched, including bowel movements. For patients with heat closure, it may be faint, hot sputum, flushed face, red eyes, including high fever.

In Angong, the market price of Niuhuang Wan (double natural specifications) will increase from 560 yuan/pill to 780 yuan/pill, which is an increase of nearly 40%. Although this news has not yet been officially announced Confirmed, but it has been confirmed in some retail terminals. Affected by this, Tongrentang shares opened higher in the early trading on the 25th and closed up 4.28%. The transaction amount was significantly enlarged, and the inflow of funds was obvious.

In fact, it is not without evidence that the price of Angong Niuhuang Wan had to be increased. The price increase in the Chinese herbal medicine market in China has long been reported. Angong, among them, the main raw material of bezoar pill, natural bezoar, rose the most. ——It has quadrupled in three years, and the purchase price of 500 grams is as high as 200,000. At the same time, the price of artificial bezoar pills has increased from 500 yuan at the end of last year.The kilogram has risen to the current 800 yuan/kg, and the increase is as high as 60%.

Industry insiders predict that the increase in the price of Chinese herbal medicine will cause the cost of pharmaceutical companies to rise, and some pharmaceutical companies will have to increase the price of terminal products. Chinese patent medicines will usher in price increases in the future. Only one month later, Tongrentang responded to this prediction with practical actions