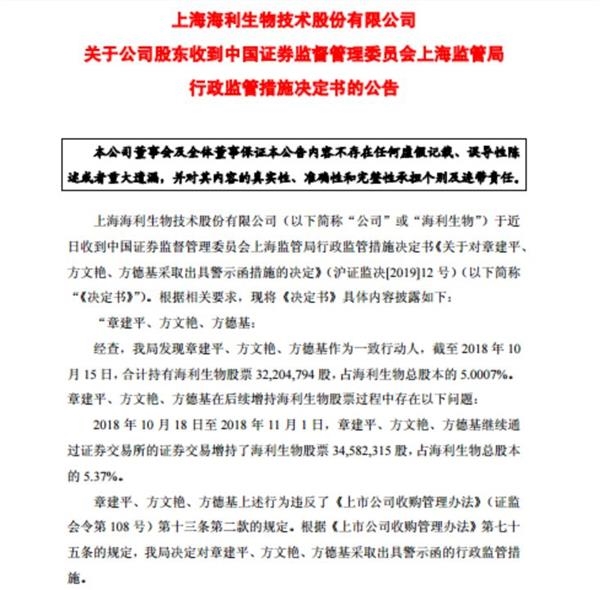 And the penalty starts from the violation of holdings. From October 18, 2018 to November 1, 2018, Zhang Jianping, Fang Wenyan, and Fang Deji continued to increase their holdings of 34,582,300 shares of Haili Biology through securities transactions on the stock exchange, accounting for 5.37 of Haili Biology’s total share capital %. The above behavior violated relevant regulations, and it was decided to take administrative supervision measures to issue warning letters against Zhang Jianping, Fang Wenyan, and Fang Deji.

It is worth noting that Zhang Jianping and his concerted actors have increased their holdings of Haili Biotechnology three times before. As of the close of January 8, 2019, Zhang Jianping and concerted actors have used their own funds to accumulatively increase their holdings of Haili Biotech’s shares through block transactions and centralized bidding. 98,898,300 shares, accounting for 15.37% of Haili's total share capital.

In addition to Haili Biological, ZTE, BOE A, LeTV, Kangtai Biological and other companies shareholder lists Zhang Jianping and his agreement. The figure of a man in action. In these investments, Zhang Jianping is not a general who always wins, and often has profits and losses.

Illegal increase in holdings was investigated

According to the announcement, the Shanghai Securities Regulatory Bureau found Zhang Jianping, Fang Wenyan, and Fang Deji as concerted actors as of October 2018. On 15th, he held a total of 32,204,800 shares of Haili Biological, accounting for 5.007% of Haili’s total share capital.

According to the second paragraph of Article 13 of the "Administrative Measures for the Acquisition of Listed Companies", after investors and their concerted parties have equity of 5% of the issued shares of a listed company, they shall pass the securities transaction For securities transactions in a stock exchange, for every 5% increase or decrease in the proportion of the shares it owns in the issued shares of the listed company, a report and announcement shall be made in accordance with the provisions of the preceding paragraph. Within the reporting period and within 2 days after the report and announcement are made, no further trading of the listed company’s stocks is allowed.

The Shanghai Securities Regulatory Bureau stated that if you are dissatisfied with the supervision and management measures, you can apply for administrative reconsideration to the China Securities Regulatory Commission within 60 days from the date of receipt of this decision, orWithin 6 months from the date of this decision, file a lawsuit in a people’s court with jurisdiction. During the period of reconsideration and litigation, the implementation of the above supervision and management measures will not stop.

Zhang Jianping "phase in" Haili Biology in April 2018, and for the first time in the 2018 semi-annual report Appeared in the list of the top ten shareholders of Haili Biological.

Since then, Zhang Jianping and those acting in concert have reached the first quotation line.

On January 9 this year, Zhang Jianping and his family completed their third placard. As of the close of the market on January 8, 2019, Zhang Jianping and concerted parties have used their own funds through block transactions and centralized bidding transactions to accumulatively increase their holdings of Haili Biological’s shares to 98,898,300 shares, accounting for 15.37% of Haili Biological’s total share capital. The second increase in holdings was 32,200,000 shares, accounting for 5% of Haili's total share capital.

It is worth noting that since Haili Biotechnology disclosed Zhang Jianping’s shareholding plan on October 17 last year, to January 8, 2019, Zhang Jianping and his concerted actors increased their holdings by 66,782,500. Shares, costing nearly 900 million yuan.

At the same time that Zhang Jianping increased his holdings substantially, Haili Biotech’s stock price also took advantage of the trend. The stock price has gone from around 7 yuan in late September last year. It rose to around 15 yuan at the beginning of November last year.

Compared LeTV and ZTE, which "stepped on thunder" earlier, and Zhang Jianping's recent good performance of Haili Biology are not optimistic.

Haili Biotechnology is a professional veterinary biological product manufacturer integrating R&D, production, sales and service. The company’s main products include vaccines for livestock and poultry, and vaccines for pigs. Vaccines are the mainstay, basically covering all vaccine varieties involved in pigs.

On the evening of January 28, Haili Bio-Bio released the 2018 annual results pre-reduction announcement. The company expects to achieve net profit attributable to shareholders of listed companies from 28 million to 50 million yuan in 2018, a year-on-year decrease of 56.04% to 75.38%. It is estimated that the net profit attributable to shareholders of the listed company after deducting non-recurring gains and losses will be 19 million yuan to 33 million yuan, a year-on-year decrease of 57.45% to 76.22%.

The main reason for the performance changes is the decline in main business income. The veterinary biological products industry where the company's main business is located mainly serves the breeding of pigs, chickens and other livestock and poultry. Therefore, it is closely related to the development of the breeding industry and the incidence of animal diseases. The trough of the "pig cycle" in 2018 is coming, and the African swine fever The spread has led to a drop in pig prices, a large number of live pigs infected with the epidemic have been culled, and the demand for vaccines has also fallen sharply. The company's sales are mainly pig vaccines and channel sales. Therefore, the decline in pig prices and African swine fever have had a serious negative impact on the company's main business income, which has led to a significant decline in performance. At the same time, due to the shutdown and transformation of some of the company’s workshops, the production capacity of main products is under pressure."The status also limits the company’s business expansion.

In addition, during the reporting period, important holding subsidiaries suffered losses. Due to the spread of African swine fever, the country has introduced a series of control measures to prevent and control the epidemic. This has caused important obstacles to the launch of new products of the company’s holding subsidiary Yangling Jinhai Biotechnology Co., Ltd. (hereinafter referred to as "Yangling Jinhai"), causing the relevant market sales to fall short of expectations. According to the requirements of the Ministry of Agriculture Announcement No. 2635, it contains Asia I Vaccines of type foot-and-mouth disease virus components will no longer be produced and sold after the second half of 2018, while the foot-and-mouth disease type O, A, and Asia I trivalent inactivated vaccines (OHM/02 strain + AKT-III strain + Asia1KZ) produced in the early stage of Yangling Jinhai /03 strain) (suspension culture process) due to the influence of the "pig cycle" and African swine fever could not be fully digested, and the remaining part was scrapped because it could not be sold.