Ranking of game companies by market value, Tencent is equal to the sum of the Big Four

[17173 special manuscript, please do not reprint without authorization] 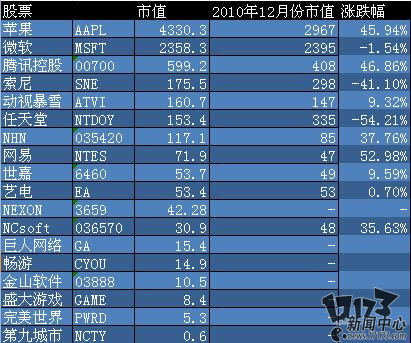 In the table above, we list the changes in the market value of some well-known international game companies (using Apple and Microsoft as the reference system. Apple is against the sky, but there are some, except for Microsoft.) The combined family is less than half of his). Through combing, we can find many bright spots (the market value does not fully reflect the strength of listed companies. This article only compares game companies horizontally and vertically from the perspective of market value).

Tencent continues to rule the roost, and its market value is nearly 4 times that of Activision Blizzard and one-seventh of Apple

Among companies whose main business is games, Tencent has been the world leader a few years ago. With the old predators such as Sony and Nintendo, Tencent’s momentum is even more difficult to stop, and its market value is already Activision Blizzard’s 3.75 times, Sony’s 3.41 times, and EA’s 11.2 times, equal to the total market value of Sony, Activision Blizzard, Nintendo, and NHN. Of course, if compared with Apple, Tencent's market value is only one-seventh of this legendary company.

The ship was in a difficult situation to turn around. Due to the failure to make adjustments to market changes in time for large-scale old manufacturers such as Nintendo and Sony, their market value fell by as much as 40 to 50% in the past two years, showing their fatigue.

Domestic manufacturers are relatively flexible. In the past two years of changes in the gaming industry, NetEase has achieved a 52.98% increase in market value, and Tencent’s market value has also increased by 47%. This may be related to the relative closure of China's game industry and the generally diversified attitude of domestic manufacturers.

Relying on high-quality online game products, Korean companies generally have a good performance in terms of market value. Both NHN and NCsoft have achieved a growth of 3-4%.

Although Changyou just overtook Shanda in the fourth quarter of 2012 and became one of the top three in China, its $1.5 billion market value still lags far behind Tencent and NetEase, and the Matthew effect in the domestic market has become more prominent. Perfect, Giant, and Shanda all have similar situations. Among them, Shanda Games' market value of US$860 million has fallen by nearly 70% from its market value of US$2.6 billion in December 2010, and is withdrawing from the competition for first-tier manufacturers.

From the perspective of the company’s market value alone, the development of the international game industry is generally good. Except for companies like Sony and Nintendo that have experienced huge turbulence, the market value of international game companies generally has more or less Increases. In this era of universal players, the game industry is upgrading, and game companies are continuing to advance in the melee.