CICC: Take a step towards "hydrogen"

This article is from "CICC's finishing touch."

Hydrogen energy is indispensable as a secondary energy source, and achieving “carbon neutrality” requires greater policy support. In order to achieve the goal of carbon neutrality, we believe that China may need to promote non-fossil energy-based electric energy to become the main energy source at the energy supply side, accelerate the increase of electrification rate, and accelerate the promotion of hydrogen energy in the field of non-electric energy , Carbon capture and other new technology applications. We believe that the current preparation, storage, transportation and application of hydrogen energy are all imperfect, and in the long run, green hydrogen has a clearer route to reduce costs. Hydrogen production by electrolysis of new energy sources at the hydrogen production side is a medium- and long-term development route; the reduction in the cost of hydrogen transportation will depend on the improvement of technology and scale; the large-scale and localization of terminal hydrogenation is the main driving force for cost reduction.

Hydrogen energy production: Chemical by-product hydrogen has cost advantages, and in the long run, hydrogen production from electrolysis of water will become the mainstream. At present, the utilization of domestic chemical by-product hydrogen is a better choice for hydrogen supply in the fuel cell industry. The domestic chlor-alkali, PDH and fast-developing ethane cracking industries can provide sufficient low-cost hydrogen resources. In contrast, we believe that hydrogen production by electrolysis of water is the cleanest and most sustainable way to produce hydrogen, but it is currently difficult to use on a large scale due to higher costs. We expect that after 2025, with the continuous increase in the proportion of new energy power generation, the ultra-low new energy price (0.1-0.2 yuan/kWh) of the wealthy part can reduce the cost of hydrogen production from electrolysis of water to below 15 yuan/kg. We expect that it will drop to more than RMB 10/kg after 2040, which provides a large room for reduction in the cost of hydrogen supply in the medium and long term.

Hydrogen energy applications: From a few uses to more applications, the transportation field will become an important place. From the perspective of application difficulty, we believe that passenger cars (3000km) and ships transporting liquid ammonia will have a greater cost advantage than hydrogen and organic liquids. 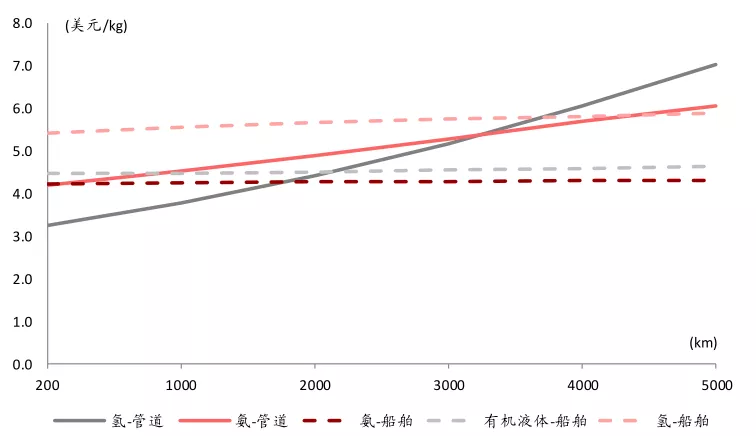 Note: Including conversion, transportation and re-conversion costs; assuming that the pipeline has a capacity of 100 tons per year, and the terminal’s local transportation distance is 50km; data source : IEA, CICC Research Department

1.Developing from a few uses to more applications, the transportation field will become an important landing site

The certainty of hydrogen energy applications is strong, and there is a large space in the field of heavy trucks. In the long run, the aviation field Expand. In the context of carbon peaks and carbon neutrality, we believe that hydrogen, especially "green hydrogen" based on new energy sources, is an important medium for the zero-carbon energy system; in the process of "decarbonization" in the road transportation field, lithium electricity is already available. To meet the basic requirements of passenger cars for endurance, it is difficult for long-distance commercial vehicles to apply pure electric solutions based on lithium batteries. Hydrogen fuel cell solutions have become a necessary option for the electrification of long-distance commercial vehicles. Under the background of mature hydrogen fuel technology, the short-term industry has entered a policy honeymoon period, and the industry's development is expected to usher in the first acceleration. With the successive introduction of national and local hydrogen energy promotion and support policies, we believe that the commercialization process of the hydrogen energy industry chain will enter a period of acceleration, the revenue of related companies will start, and the activity of the industry chain will definitely start.

Passenger cars will become the "touchstone" for the landing of hydrogen fuel cells. From the perspective of application difficulty, we believe that passenger cars